As Immigrants, we should take this opportunity to help and establish that connect with the heart of the countryside. When we stand by their pain and identify with them, we share sentiments and solidarity and establish a connect. Initiatives such as this, will also helps us to bridge that gap and prevent those isolated incidences of violence against Asian Indians, and Immigrant community in general.

I request you all to contribute physically and monetarily towards the effort in rebuilding Canton and its vicinity. Please share this within your family, friends and professional circle.

This is time sensitive and being there at the time of need is utmost important. Please read complete article on http://wp.me/p7XEWW-RL 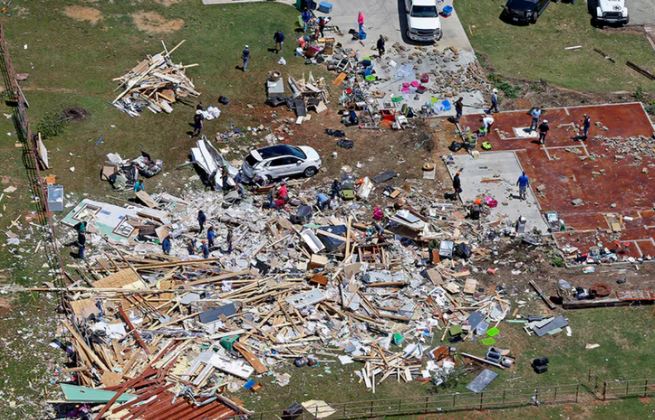 At least 4 tornadoes touched down yesterday (April 29, 2017) in Canton Texas, a small town in East Texas with a population of 3578 and an average income of $40,000 per household. Canton and its vicinity were ripped apart by these four tornadoes. Four people lost their lives and several lives are devastated with the loss of their only dwelling including their automobiles.

According to KXAS-NBC5 TV, the tornado that struck Canton was up to a half-mile wide as it ripped a 40-mile path along, also striking Fruitvale and Emory (KXAS). Texas Gov. Greg Abbott said the damage was “devastating” during a news conference with local officials Sunday afternoon. “You saw homes and other buildings that were incompletely flattened, as well as others that were nothing more than rubble,” he said, adding that he saw “large swath after large swath of devastation.” Power was knocked down and according to estimates; it may take 10-14 days to resume power.

An Opportunity to give

As immigrants, we have this opportunity to do for these local people who are affected because of catastrophe. When any catastrophe strikes, we tend to gravitate towards India or the place where we come from. However, we have to develop a special connection with our adopted land or country. Crisis such as this will offer the locals understand our philanthropy, culture and our shared sentiments during times of their pain.

In an interview with NBC News over the phone, Governor Abbott has suggested, rather than giving clothes etc., people can donate money to those affected by the storm. We all should contribute towards these efforts. Contribution can be helping the cleanup efforts, working towards rebuilding efforts and doing anything that will get their lives on track.

Time to act, time to connect

As a first step, I reached out to my farm neighbors (In Canton) and people who work with me in Canton. One of those was Keith (second name not disclosed). His father is on oxygen due to long standing emphysema. Power outage has forced Keith to buy a generator and Keith cannot afford that. I bought one to be loaned to him until power is restored.

Tomorrow (May 1, 2017), I will be driving to Canton and taking a first-hand account of the devastation. I will get to know how many are affected and what best can be done to help them.  In the interim, we all can contribute efforts, funds and material. Funds would be either channelized through Government Agency such as USDA’s Rural Development or local Churches. As always, I will make my best efforts in bringing transparency and visibility on the funds and their utilization.

Activities that can be covered (not an exhaustive list) are

Mid/Long Term – Enabling those affected back to work

In my personal discussion with several folks within our Indian and Asian diaspora, specifically from the Information Technology and those owning Businesses, have offered help. We have formed a small committee and are directing the efforts through these folks, you may assist them with their specific activities. As of this writing (Sunday April 30, 2017), since this happened on Saturday April 29, we still are working on a formal structure to direct this help. Updates will be provided as those are available as an addendum to this paragraph.

A story of Urban-Rural Divide

Coincidently, Canton is also a place where we have our farm/ranch. Canton is a place which has got me closer to the heart of America. It is this place which opened my perspective on America. Urban US are different from countryside and it is this place that opened the doors for me towards the countryside. Unlike urban people, who are matter of fact and business like, countryside offers the charm of connecting with people and understanding their culture and values. I was surprised, unlike what we hear back in India and abroad, these people are very warm, receptive and hold the same cultural values as we all do. This is the place for my connection with real America.

Fruitvale Church Puts Their Faith To Action Cleaning Up

The Story of Canton and Van Zandt County.

It is a small town with population of 3578 and an average family income of $40,000 per annum. An interesting story of Canton can be found on Wikipedia. Canton is the county seat for Van Zandt County (district), most famous for its First Monday Trade Day, a flea market or Trade Fair that started in 1850. The flea market attracts local artisans, business and farmers from across East and South Texas, Southern Oklahoma, Arkansas and has approximately 100,000 businesses transact trade. Other places in the vicinity, such as Edom and Ben Wheeler are famous its red soil and tomatoes, grand Saline for its Morton Salt quarries and Van for its 50 year old oil Rigs.

There is no excerpt because this is a protected post.

Terrorism is Pakistan is fast spreading and engulfing the nation as never before. The worst part is innocents – kids, ladies and elderly fatalities that often leave brutal consequences of exponentially rising orphans and no caretakers and humungous misery lasting for generations.

Often, it brings a moot point to the fore, ‘Pakistan is Imploding’, from its home grown radicalism and fanning terrorism. It is time, this menace be stopped with a multipronged approach. It is a nation in turmoil and the global community need to help and guide the destiny of those innocents.

It is truly sad to see innocents die. As a phenomenon, I feel concerned about how long this implosion will last. Sincerely speaking, we ought to help Pak stymie terrorism and usher into an era of prosperity since that’s one major way to stifle internal strife. However, simply providing economic opportunities won’t suffice to contain this phenomenon, religious leaders ought to drive towards more openness and rational resolution rather than aggressive suppression. While doing so, Pakistan itself has to distance religion from the military establishment. This is a classic example where religion and military make an ideal milieu for aggression and ruthlessness. We still have Turkey with its brand of Islam. They are not aggressive like Pakistan, Sudan, Saudi Arabia?

Memory is deceiving, though meant for providing wisdom, it makes us remember yesterday. Let us put that past behind and take the nectar of wisdom with us in the future. Let us live today.

It’s a beautiful Sunday morning out here, spring is on its way. Temperatures are just rising and plants are emerging from dormancy, birds are humming and flowers are blooming – making it an exact milieu for outdoor.

Today is what matters most

Today is a reflection of yesterday

Today is a future we build today

Today belongs to you, do that today

Live and enjoy today and leave the past behind, past is an existence of reality that paves way for today and that provides a vision and mission for tomorrow. Past is valuable, it’s our treasure trove, our source of wisdom, only if we know how to carve out our future optimistically and confidently.

Enjoy your day and…

Have a wonderful day!