I trust, they can be well absorbed in their religious, ideological, cultural and environmental (RICE) milieu far better in any of the Middle East nations. In fact, it’s a huge misfit to try to assimilate them in a hugely different environment other than RICE, mentioned above. This goes both ways, for those displaced and for those have to bear the brunt of absorbing those displaced within their (European) community.

We are essentially dealing with ethical dilemma on handling humanitarian issues involving massive displaced population from Syria and surrounding region, primarily consisting of Muslims. That’s how I am formalizing the problem statement.

Let’s understand what happens when we try insulate our universal values:

First, it originated in Syria. Why? Imposing Its western view of value system and norms of democracy. Iraq is fresh on our mind. The world has seen what happened after displacing and overthrowing Saddam. Saddam was brutal but his regime, barring very select few, had achieved a homeostasis. He established an ecosystem if not an order, not necessarily to our liking, but from chaos to stability devoid of our democratic norms.

Syria is the same boat. Reprisal is the norm in such regimes. When there is an outcry, a rebellion against such practices, world and especially the western powers cannot be mute spectators. Intervention in Iraq and Syria are not necessarily borne out of oil diplomacy, its values that were gravely compromised.

What followed was a culmination of vicious events, power vacuum, severely affected Sunni against Shia regime and the monstrous formation of ISIS that further engendered human values and unleashed total chaos. A chaos of epic proportion that resulted in untenable condition that stretched human tolerance beyond acceptable living.

Who should own it? We see soft and hard issues. It’s a displacement of massive population practicing Muslim faith pertaining to Middle East. Their ideology, cultural and ethnic origin makes assimilation an easy fit within similar regional set up. Displacement on such massive scale needs a systemic approach to manage the issue and solve the problem. Who should own the cost of re establishing this displaced population. Well, it’s fruitless to go into the root cause and pinpoint the owner/s. It’s a humanitarian problem and this should be handled by humanity alone, to call it specifically, piecemeal cherry picking l, approach and reactive approach is unlikely the solution so is a rationale based on hyphen emotions. Ethical dilemma is because we don’t know who should own this spillover from refuges.

European countries decided of living in a world with value framework, ground rules that form the fabric that holds their individual countries together. Let’s look at this issues individually. Bystander issues cannot take central stage when it comes to handling such an issues. Notorious elements, and malignant ones, like terrorist.

We need a systemic approach in understanding different factors and after unraveling, strategies can be made on how best to handle. On refugee crisis, I trust, they can be well absorbed in their religious, ideological, cultural and environmental (RICE) milieu far better in any of the Middle East nations. In fact, it’s a huge misfit to try to assimilate them in a hugely different environment other than RICE, mentioned above. This goes both ways, one for those displaced and two for those have to bear the brunt of absorbing in their community.

Now, let’s look at other angles. Intolerant practices and will full ignorance of norms. Muslims, in general, have a highly intolerant attitude towards other faith, to the extent of violently reacting when opposed to certain practices. It’s not Charlie Hebdo alone, Paris Massacre, Sex attacks in Germany etc., they all point towards a clash of values. These are all maladjustment to cultural and ideological norms. Why should one perpetrate another round of injustice on these West European? It’s natural destination for immigration to be in the western world. Everyone wants to enjoy the fruits of civilization and a community based on scientific and rational thoughts. So is this quest for western destinations but, they should be absorbed locally, within the RICE constraints.

An accepted norm of a guest, they follow the norms of their hosts. It’s surprising that the refuges haven’t, as a class, followed those norms. It’s a by stander effect, that some notorious elements crept in and inundated and overwhelmed not only the law and order but the infrastructure and amenities created by the institution.

Four maps that explain the chaos of the Middle East

How almost everyone wants a piece of Mosul

The history of Mosul, in five maps

Is fear of change at the root of Europe’s anti-immigrant backlash?

Is fear of change at the root of Europe’s anti-immigrant backlash?

Muslims in Europe: A Short Introduction

How to Integrate Europe’s Muslims

How to Integrate Europe’s Muslims

Displacement in the Muslim World: A Focus on Afghanistan and Iraq

Displacement in the Muslim World: A Focus on Afghanistan and Iraq 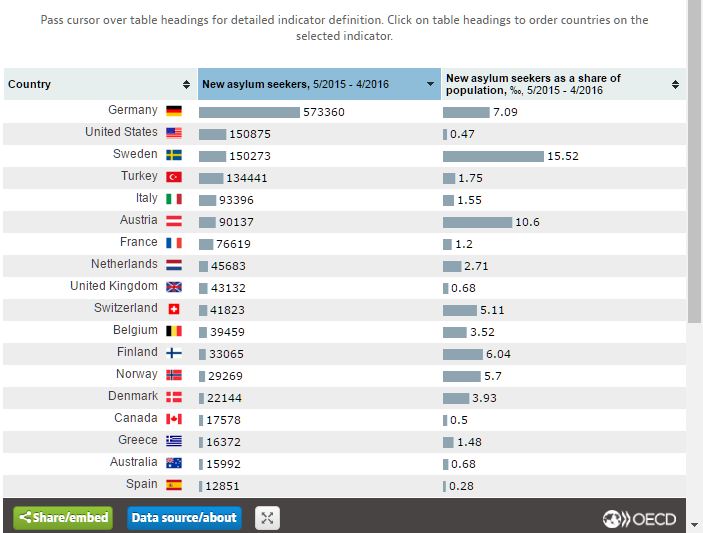